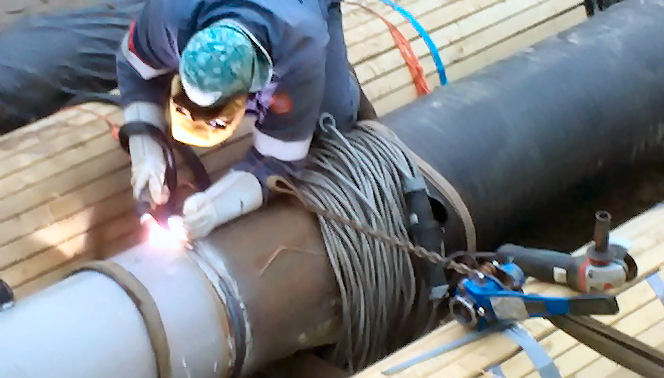 The consequences of undesired magnetism can be very costly. Contaminating chips or punched parts sticking to a die are undesirable; they interrupt production, which costs time and money. Not being able to weld an oil pipeline can shut down entire industries. For this problem,a demagnetization specialist is regularly called in to handle the situation on site.

Mobile demagnetization system
This is often done with a mobile demagnetization system designed by Goudsmit, consisting of a mobile control unit and 100 to 200 metres of special cable, wound on a mobile trolley. This is the solution for removing or neutralizing remanent magnetism. The cable is wrapped around the pipe or machine to form a coil, and then the flow of low-frequency current from the control box gradually neutralizes the magnetic field. Such problems occur in various industries, including the offshore, chemical, shipbuilding, transport (railways) and metal industries.

Production lines
Demagnetization tunnels – low or high frequency – can also be used directly in production lines, such as those for nails and screws, rails or saw blades, as well as for the production of steel pipes or the application of insulation to pipes. Another application is a demagnetization tunnel for an ultrasonic or water-based cleaning process. In a continuous process, such tunnels efficiently remove undesired remanent magnetism.

Demagnetization on location
For incidental cases, Goudsmit offers a demagnetization service in Waalre, or on location in production environments or even on-site at a customer’s location. A mobile demagnetization unit has been designed for this purpose that can be used for onshore and offshore welding and repair of pipes and pipelines. Or the demagnetization of products and machine parts that are difficult to transport or cannot be dismantled. Demagnetization specialists from Goudsmit eliminate undesired magnetism both at home and abroad.

In a nutshell, then, undesired residual magnetism costs time and money and has a negative impact on the quality of finished products.
Goudsmit demagnetization systems remove undesired magnetism or reduce it to a negligible level.