Demagnetization on a floating pontoon in Poland 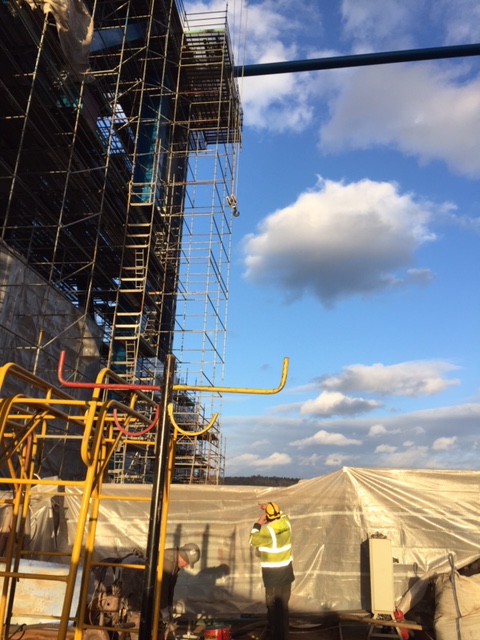 Our demagnetization expert Roy van der Heijden received a phone call from a man asking whether Goudsmit might be able to help remove undesirable magnetism from a floating pontoon in Poland. A pontoon is a floating platform or flat-bottomed barge that supports something; in this case, a crane that had to lift concrete blocks weighing 1.3 million kilograms.

WELDING MAGNETIC RAILS
The magnetism was in the tracks or runner rails that the crane runs over – sections 12 metres long. Four of these rails had to be welded together using a technique called SAW or ‘submerged arc welding’. But they couldn't do it, because the rails contained residual magnetism that was deflecting the welding arc.

The call was from the Dutch crane supplier who, along with the supplier of the rails, was responsible for getting the job done. He wondered if it was possible to remove the magnetism in the way described on our website. It all seemed like a lot of hocus pocus to him until Roy, our demagnetization expert, explained in more detail. He was convinced it would work and relieved to have found a solution.

THE SOLUTION
Roy says, “When I arrived with my cable and equipment to remove the magnetism, everyone gathered around as if they were about to see someone walk on water. The crane lifted my equipment and the power supply to a height of 35 metres. It would take a bit of doing to get this job done! First I performed a measurement; the magnetic flux density was around 200 gauss.

That is far too high for welding. Next I wrapped the cable around the rails, and they were just long enough. Then I put power on the cable, a gradually decreasing demagnetization cycle. It didn't take long before the magnetism had dropped to 40 gauss, which is perfectly acceptable for arc welding!”

Do you have a problem with undesirable magnetism? Call 040-2213283 or email: info@goudsmitmagnets.com