Why demagnetize on location? 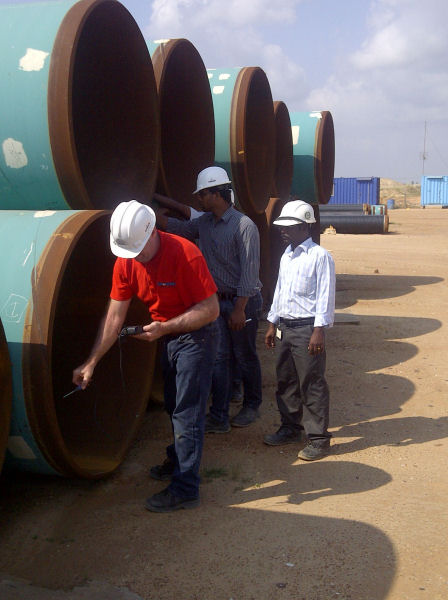 Not too long ago we received a call from a Dutch customer who was at his wits end. He had delivered pipe material to India intended for an offshore pipeline and then discovered that the sections were fully magnetized, making it impossible to weld them together. It was a panic situation: construction came to a standstill, the contract labourers could do nothing but wait and, meanwhile, money was draining away like sand in an hourglass.

Surprised
After two days of preparation our service engineer, Ger, departed for India. The trip by car, plane and train took 21 hours, but once there he was able to demagnetize all 43 sections of pipe – to the amazement of all the onlookers. It must have seemed like hocus pocus, because except for a huge coil of cable and a control box, there was nothing to see.

What causes undesired magnetism?
Undesired magnetism can result from various things, such as magnetic lifting of sheet metal or pipes. Other causes include magnetic crack detection and even mechanical machining processes such as milling, drilling and grinding. These can produce residual magnetism, making the product unmanageable.

Magnetism attracts or repels, as everyone knows. In this case, when the welders tried to work on the pipes the welding arc was repelled and the electrodes were drawn to the pipe. This made welding impossible. Fortunately Ger was soon on site to save the day.

Minor miracle
Ger measured the magnetic value of several pipe sections and then wound several metres of cable around the ends of one to form a coil. After fiddling with the control box for a few moments the magnetism was completely gone. Piece of cake! He then spent a day and a half performing the same procedure on the remaining 42 pieces of pipe and the job was finished. ‘Magic Ger’ could head back home.

All the way to India?
Undesired magnetism occurs in moulds at production companies, for example. These can stick together, causing production standstills and even damage. Companies that are confronted with such problems regularly often have their own demagnetization tunnel with a control box. This is a simpler way of getting the product from A (magnetic) to B (demagnetized).

When this need arises only occasionally, the object can also be sent to Goudsmit in Waalre. But when –as in India– the situation involves four-metre-long sections of thick-walled, 70 cm diameter steel pipe this is naturally out of the question. To say nothing of demagnetizing an object that is kilometres long, such as train rails that have become magnetized.

Mobile demagnetizing unit
Goudsmit’s engineers have developed a mobile system for such situations, which essentially replaces the tunnel with 100 to 200 metres of cable, wound on a wheeled trolley. The cable is wrapped around the pipe or machine to form a coil, and the flow of current from the control box then demagnetizes the object.

Until recently only Goudsmit technicians, like Ger, could operate this unit. But we have now upgraded it to include a touchscreen, an interface and an easy-to-use selection menu so anyone can set it up and it makes all the necessary adjustments itself. Anywhere in the world.