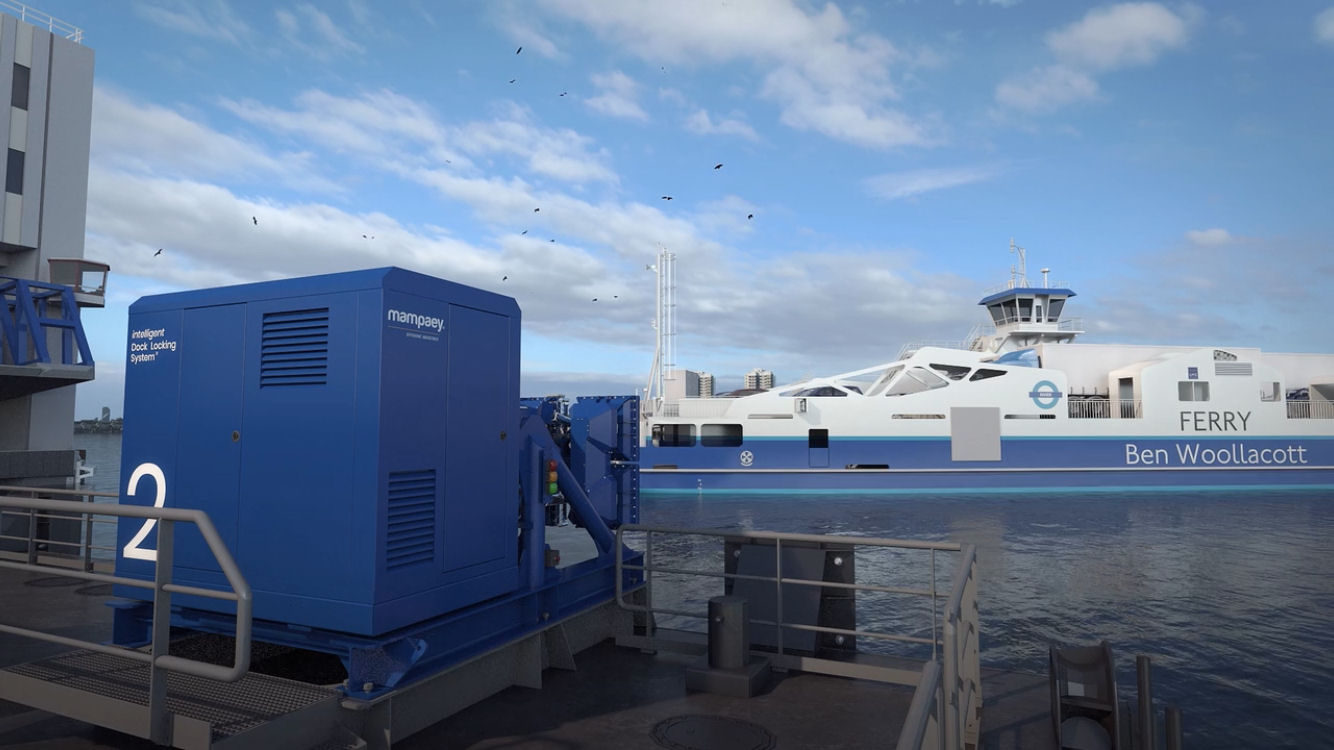 The recently developed intelligent mooring system from iDL, the intelligent Dock Locking System from Dutch company Mampaey Offshore Industries, is the world's first magnetic mooring system. It makes it possible for a London ferry to dock in just ten seconds. The mooring system consists of two hydraulically controlled arms, each with a magnetic plate at the end, measuring approximately 1500 x 1500 mm, which hold the ferry in a stable position at the dock.

Cleaner environment
This approach to mooring reduces emissions, saves fuel and use of the engines and contributes to a cleaner environment. The neodymium-magnet equipped plates or ‘magnet pads’, with a breakaway force of 80 kN (=8000 kg with a 6 mm air gap), were developed by Goudsmit Magnetics of Waalre (NL). The magnets attract two 20 mm thick plates welded into the ferry's hull. This mooring process is continuously monitored. Important aspects during the process of developing the magnetic plates were the ‘sway’ and ‘surge’ forces that cause the ferry to move up and down. The hydraulically controlled plates absorb these forces and hold the load firmly in place. Various calculations and tests preceded the ultimate creation of the world's first magnetically moored ferry. See film: https://vimeo.com/290490965

Comsol and FEM calculations
Jan Lemmens, technical sales engineer at Goudsmit explains the process: ‘‘Mampaey had been looking for a way to magnetically moor ferries for some time. My first thought was our magnetic gripper, but it is pneumatically operated, making it impossible to achieve a breakaway force of 80 kN. So we developed a magnetic plate that has a breakaway force of 80 kN. A single installation consists of four of these magnetic plates, which together form a single large magnet with a surface area of approximately 1500 x 1500 mm. The individual magnetic plates are switched on and off by a hydraulic cylinder. It hydraulically moves the plate up and down and forwards and backwards.

Sway and surge
Mampaey refers to these movements with the nautical terms ‘sway’ (in practice 320 kN) and ‘surge’ (in practice 130 kN), and the associated forces are caused by passing ships and the flow of the water, in this case the River Thames. Naturally the plates are also covered with a saltwater-resistant coating. Before we could build a test unit on the basis of Comsol calculations, we did our utmost to achieve resistance to a breakaway force of 80 kN, assuming an air gap of 6 mm.

Airgap
This air gap is the sum total of the coatings on the ship, surface irregularities on the mooring plate and the thickness of the friction pads that we use to create extra friction on the ship's hull or mooring plates. Through use of an FMEA model in an early stage, we were able to minimize the design risks. Using the FEM and Comsol calculations that our people performed we were ultimately able to create this magnetic system.

We conducted various tests with the specially built test installation, such as a 80 kN breakaway test (maximum sway), a 20 kN lateral force test (maximum surge) and a fatigue test of over 30,000 cycles, all of which were passed with no particular problems. Then we could release the magnet for production.”

Woolwich ferry
The new magnetic mooring system is currently being installed in London, which will take until the end of this year. The new system will be officially inaugurated in January 2019. The Woolwich Ferry transports around two million passengers and vehicles across the Thames per year, which entails mooring around 25,000 times at each terminal.

First magnetic mooring system
It is the first magnetic system in the world with which ferries can be moored. The system was chosen for its performance, efficiency, safety and durability. The mooring operation is continuously monitored; this makes it possible to monitor the mooring weight and log the numerical data. Use of the iDL mooring magnet reduces emissions, saves fuel and use of the engines and also contributes to a cleaner environment. The magnetic mooring and berthing with this type of magnet from Goudsmit is the property of Mampaey Offshore Industries. They intend to implement more of these systems worldwide.