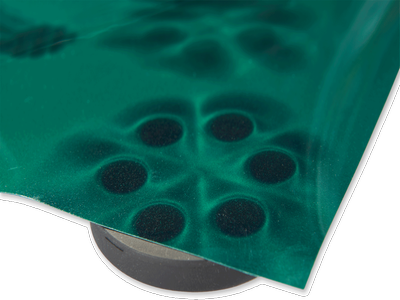 Magnetic viewing film is a translucent film with small metal particles dissolved in liquid that can move in the film. These particles react to the magnetic field and form the magnetisation pattern.

The magnetic viewing film lights up dimly at high flux density. The light lines show the separation between the north and south poles.

The magnetic viewing film shows whether a magnet assembly has, for example, been damaged.

* We can deliver this article within {0}. We will keep you informed of the exact delivery date.
Specification
Downloading has failed, please try it again or contact us. Download Specs |