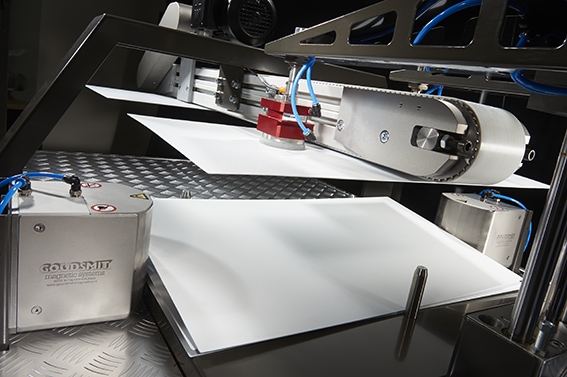 For the fast and precise placement of steel sheets in a press, Goudsmit has developed a magnetic timing belt that transports these sheets to and from the press. The transport to and fro is done with an acceleration speed of 6 m/s2. If desired, the belt can be provided with permanent or switchable electro magnets. In the latter case, the magnetic force can be switched on and off electrically, with the possibility for a robot to take the sheets over.

The belt is appropriate for a sheet thickness of 0.7-2.5 mm. In order to avoid that two sheets are picked up at the same time, the system is equipped with two compact, pneumatically switched, sheet separators.  Magnetic grippers, provided with a friction pad, handle the sheets without damaging them and where necessary provide sufficient friction.

Sheet separators
The newly developed magnetic sheet separators are made of very strong Neodymium Iron Boron magnets and can be switched on and off pneumatically. Pneumatic separators separate stacked steel sheets, which makes it possible for a robot to lift them one by one from the stack. When such separators are not used, the oiled sheets stick together and sometimes the robot lifts two sheets at the same time, after which either one is dropped or two sheets are placed together, for example, in a press. This can cause considerable damage.

Magnetic grippers
Magnetic grippers, with or without a rubber pad, lift up the steel sheets and handle them without displacement or damage. These grippers are switched on and off pneumatically and handle sheet material including perforated sheets.